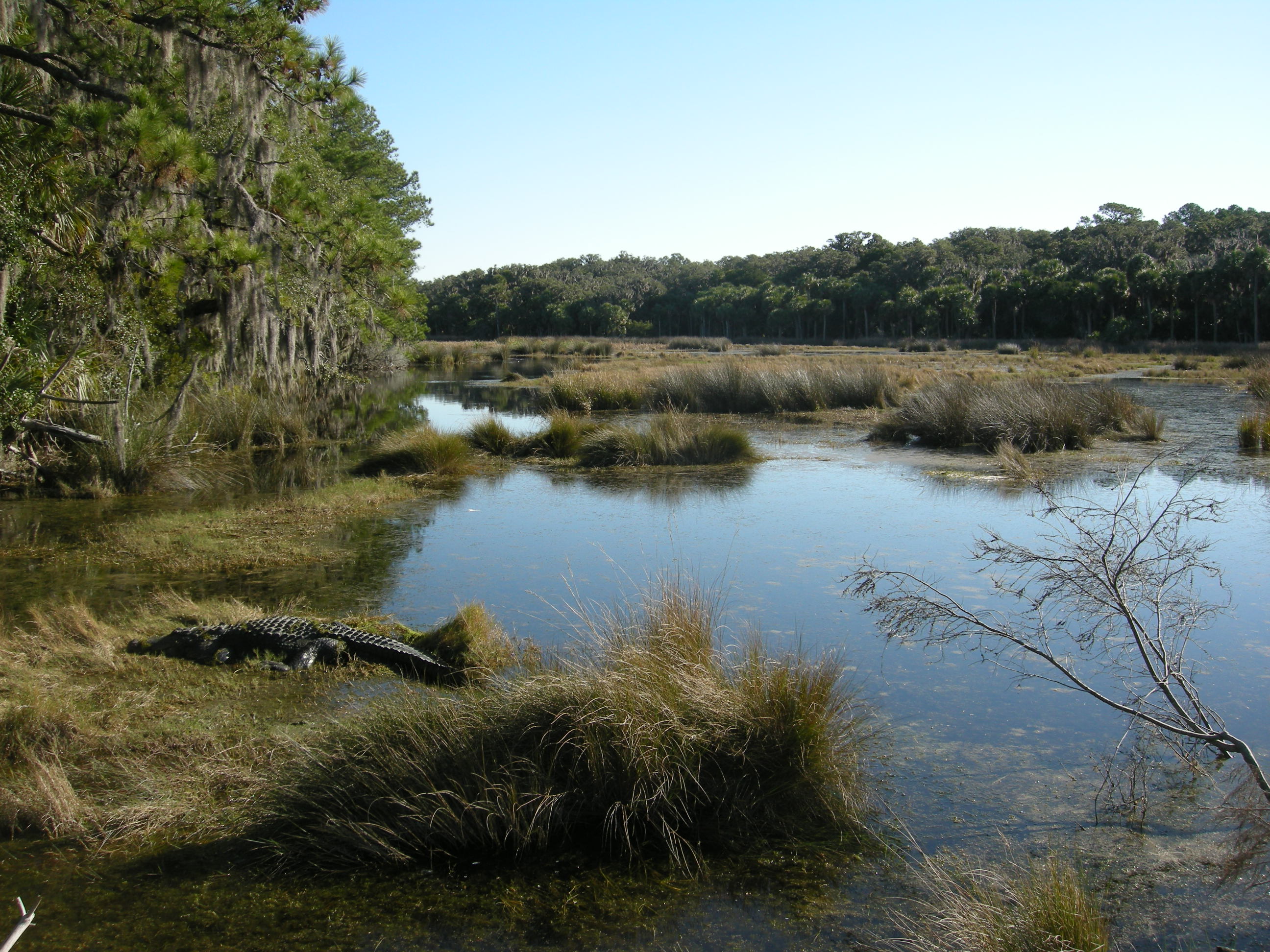 Ossabaw Island is a barrier island on the Georgia coast. The island, which trends northeast-southwest, is about 14.5 kilometers (9 miles) long and 10.5 kilometers (6.6 miles) wide, and located between latitudes 31� 49.5� and 31� 43.2� N. Of the Georgia barrier islands, Ossabaw is the most geologically unusual. Like the major Georgia islands south of it � Cumberland, Jekyll, St. Simons, Sapelo, and St. Catherines � Ossabaw is a composite island, in which sandy sediments from Pleistocene and Holocene shorelines are directly adjacent to or on top of one another. In contrast, sediments of the Pleistocene (Silver Bluff) and Holocene shorelines on Ossabaw split in its southern portion, with the Pleistocene trending north and the Holocene trending northeast. The modern shoreline, which formed only in the past few thousand years, wraps around the northeastern and southern corners of the island.

Ecosystems on Ossabaw include salt marshes, maritime forests, beaches, and a few freshwater ponds. Salt marshes are widespread west of Ossabaw, but also occupy much of the middle and eastern parts of the island between sediments of the Pleistocene and Holocene shorelines, dividing its maritime forests. The climate of Ossabaw is temperate to subtropical, with temperatures ranging from an average high of 32� C (90� F) in the summer to 10� C (50� F) in the winter. Average rainfall is about 20 centimeters (50 inches)/year, with most precipitation during the hurricane season (May-September). Hurricanes rarely affected the Georgia barrier islands until recently, when Ossabaw was hit hard by Hurricane Matthew (2016), then later Irma (2017). Hurricane Matthew in particular uprooted many of the older live oaks on the island and otherwise dramatically altered its landscape.

Although Ossabaw is often labeled as �pristine,� humans have affected its landscapes for atleast 4,000 years. Its human history is similar to that of its island neighbor, St. Catherines, beginning with Native Americans (the Guale). The Guale were there from about 2000 BCE until European occupation, which started with the Spanish in the late 16th century. The British took control of Ossabaw in the 1730s, and the Guale were replaced by Creek people, who the British allowed on Ossabaw for fishing and hunting until 1758. The British also began importing enslaved Africans to use as free labor for their plantation economy. In the later part of the 18thcentury, Americans took over the island and continued using enslaved people as laborers for growing cotton and indigo. Most inland ecosystems of Ossabaw, especially the maritime forests and salt marshes, were altered considerably by this agriculture. Following the American Civil War, a significant population of African Americans stayed on the island, but most moved to the mainland after the Sea Island Hurricane of 1893, with many of their descendants comprising the Gullah-Geechee community in Pin Point, Georgia.

Ossabaw went through several owners, but remained largely undeveloped and sparsely inhabited through the early to late 20th century. The last private owners were members of the Torrey family, starting with Dr. Henry Norton Torrey and Nell Ford Torrey and ending with their daughter, Eleanor Torrey (�Sandy�) West. The Torreys oversaw the building of a large home for themselves, as well as hunting lodges, a beach house, and unpaved roads. In 1961, after Sandy West had inherited the island, she and her husband Clifford West began the Ossabaw Project. This project brought together luminaries of the arts and sciences onto the island as a retreat for study and discussion; notable participants included composer Aaron Copeland, writers Ralph Ellison, Margaret Atwood, and Anne Dillard, and ecologist Eugene Odum. This creative initiative also resulted in the Genesis Project, which focused more on the natural sciences and hosted scientists for on-site studies of and education about the archaeology, ecology, and geologyof the island.

In 1978, Sandy West sold Ossabaw to Georgia to establish it as the state�s first heritage preserve, and it has been managed since by the Department of Natural Resources (DNR). The Ossabaw Island Foundation was established afterwards as a non-profit organization working withDNR to encourage educational, cultural, and scientific programs on the island. Sandy West continued living on the island until just recently, and of the time of this writing she is in nearby Savannah, Georgia and 106 years old.